Motivation, knowledge and running-related laughs that'll keep you busy whether you're running or not 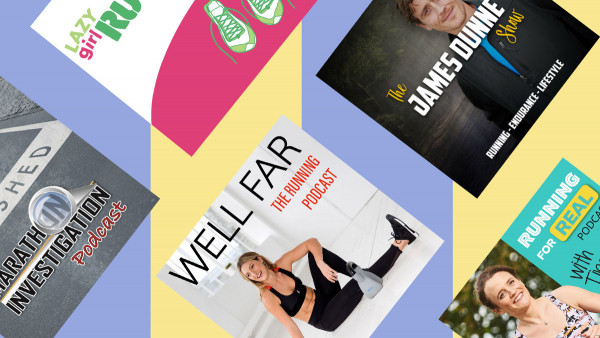 Since podcasts have boomed over the last few years, ones about health and fitness have sprung up everywhere.

It's no surprise that there are a ton of handy running podcasts out there, and we've done the leg work (ear work?) of sifting through them and finding the best ones for your listening pleasure.

Whether you're looking for a way to catch up on all the latest running news and tech, hoping to get inspired by interviews with remarkable runners or wanting to learn how to train at your best, the below podcasts should have you covered.

Have a browse through, fire up your listening app of choice and get on the audio start line.

Running For Real with Tina Muir

Tina Muir is a St Albans-born, US-based elite runner who has represented Great Britain and Northern Ireland at world championship level in the half marathon. Her Running For Real podcast is released every Friday and is aimed at all levels of runner, from total beginner to competent recreational runner and even full-blown pro.

She chats to experts, such as sports dietitian Renee McGregor and acclaimed sport science journalist Alex Hutchinson, for a well-informed insight about all kinds of running-related issues. Past topics have included eating disorders, sleep, footwear and biomechanics, as well as training tips from famed running coaches Jeff Galloway and Steve Magness.

With each episode lasting around an hour, they're info-packed and engaging, and the right length of time for you to plough out a moderate weekend run to. Tina keeps things down-to-earth and embraces the difficult sides of running, which any athlete left on the sidelines by illness or injury will appreciate. Check out the extensive back catalogue and you're sure to find answers to any burning running questions you have.

Ranked as the UK's number one running podcast, chances are you're familiar with Marathon Talk already. It's hosted by Martin Yelling (elite triathlete and ultrarunner, endurance coach and husband to Olympian Liz Yelling) and Tom Williams (founder of Woodhouse Moor parkrun in Leeds and now parkrun global COO).

The online Marathon Talk community is buzzing, with plenty of audience participation on the show: features like Kit Around the World and Marathon Talk podium put listeners at the forefront and offer a host/listener relationship that many podcasters don't. Whether you're a keen runner or just like to follow the sport, Marathon Talk is a brilliant listen.

In between interviews, there are some in-depth discussions around running-related issues (such as why cross country distances should be equalised for men and women, and the rise in eating disorders) with a mix of industry experts and runners.

Gear geeks will be delighted at their regular chats about the best products on the market, from watches to shoes and more. A laid-back, friendly show, the new half-hour format is a great way to get inspired and engage in the latest running news.

If you haven't yet stumbled across the Marathon Investigation website, you're in for a treat. Founder Derek Murphy started out trawling race results to catch runners who'd cheated their way into qualifying for the Boston Marathon, and has since turned his sleuthing into a full-time job.

He uses a number of methods, such as comparing split times and inspecting race photos, to catch out course-cutters and bib mules (fast runners paid by other people to complete races in their name). Derek has now expanded out into a podcast co-hosted by Scott Kummer, with a delightfully dramatic intro and, at times, equally dramatic guests. The pair chat to suspected race cheats, race directors and athletes to deep-dive into why people cheat and how it can be tackled.

From the team behind the Another Mother Runner online community, this podcast was launched way back in 2011 and has been running strong ever since. Presented by AMR co-founder Sarah Bowen Shea, it's a down-to-earth chatty series covering topics from the serious (sudden cardiac arrest) to the lol-worthy ('crotch torture' - we'll let you find out what that is for yourselves), with plenty of high calibre guests along the way.

Guest appearances include Shalane Flanagan, winner of the 2017 New York City Marathon and author of running cookbook Run Fast, Eat Slow, and Sara and Ryan Hall, married pro US runners who adopted four children together in 2015.

The AMR team don't shy away from TMI topics, so brace yourself for chat about all the things runners keep quiet at their post-race lunches ŌĆō haemorrhoids, chafing and so on. While some episodes are geared more towards mums, with discussions on how to rehab your pelvic floor after pregnancy, many of them have wide appeal thanks to their famous guests, kit advice and fascinating interviews.

Recorded by Women's Health Digital Editor Amy Hopkinson as she prepared to tackle the 2019 Paris Marathon, this podcast is the ideal intro to marathon training and running, well, well far. Amy covers all areas, from how to choose your ideal running shoes (with footwear expert Emma Kirk-Odunubi) and how to strength train effectively (with sport scientist and PT Luke Worthington) to how to avoid overtraining.

With 16 episodes in total, there's enough to take you all the way through your marathon training journey ŌĆō and with the host prepping alongside you, it makes for a highly relatable listen. You don't have to be going the full 26.2 though ŌĆō the show is also a great intro to the ins and outs of running for total beginners and those building up their mileage.

If you've ever Googled a running injury, chances are you'll have come across James Dunne's website Kinetic Revolution. James is a running coach and sports rehab therapist who's committed to helping runners bulletproof their bodies and stay in the best shape possible. His podcast tackles all manner of running questions about training and injuries in bite-sized episodes lasting around five to 20 minutes.

If you've got a specific concern, you can easily browse through his episode titles to find the one relevant to you and take it all in within a lunch break, saving you wading through the internet for hours on end. Past topics include how to improve your running economy, marathon training mistakes you need to avoid and whether or not you can run through shin splints.

Hosted by UK Athletics coach and PT Laura Fountain, each episode of the Lazy Girl Running podcast features a relaxed interview with remarkable female runner from the UK or a discussion about women's health. Laura made her name as a journalist before discovering a love for running and going on to author two books ŌĆō The Lazy Runner and Tricurious ŌĆō and has been leading running groups since 2013.

Guests have included ultra-running legends Nicky Spinks, who holds the record for the fastest double Bob Graham Round (that's two consecutive days running 74 miles with 28,500 foot elevation), and Susie Chan, who has taken on multi-stage races including Marathon des Sable and The Coastal Costa Rica challenge.

Additionally, Fountain has interviewed Nicola Miller, founder of women's running charity A Mile In Her Shoes and plus-size athlete Louise Green, author of Big Fit Girl. While the podcast isn't currently being released regularly, the back catalogue of 32 episodes will set you up for a few fun, inspiring hours of entertainment.