Record of human achievement made in Vienna 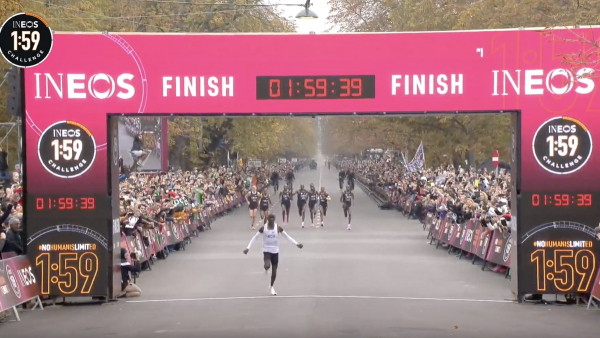 Eliud Kipchoge has become the first person to run a sub 2-hour marathon, after completing the INEOS 1:59 Challenge challenge in Vienna.

The Kenyan, who is the Olympic marathon champion and official world marathon record holder, clocked a time of one hour 59 minutes and 40.2 seconds.

The INEOS 1:59 Challenge kicked off at 8:00am Viennese time. However, there was a window open up until 20 October for him to attempt the run, in case weather conditions adversely affected his chances.

Flanked by his support pacers ŌĆō he used 41 in total to improve aerodynamic conditions like a cycling peloton ŌĆō and chasing a car beaming a laser grid onto the road ahead, Kipchoge strode down the finishing straight, waving away his team and heading towards the finish line. He was then mobbed by his team and supporters, and even had the energy to run back down the course, high-fiving the spectators that packed out the route.

ŌĆ£That last kilometre where he actually accelerated was super human. He ran the first half marathon in under an hour and then he had to do it again. Everything has to go right to do this. ItŌĆÖs so nice to see the ŌĆśpacersŌĆÖ be part of this ŌĆō they are just so full of enthusiasm,ŌĆØ said Ineos chief Sir Jim Ratcliffe.

You can watch the climax of KipchogeŌĆÖs attempt below:

Kipchoge broke his own marathon record of 2:01:39 ŌĆō although this effort wonŌĆÖt go into the official history books as records have to be achieved in open competition.

And that goes some way to mitigate some of the criticism of the attempt.

The use of pacers, engineered shoes and carefully chosen conditions are obviously designed to swing chances in KipchogeŌĆÖs favour ŌĆō but no-one can question that Kipchoge has gone where no human has gone before.