It may look like fun, but 26.2 miles is a long way when you're dressed as a giant lobster 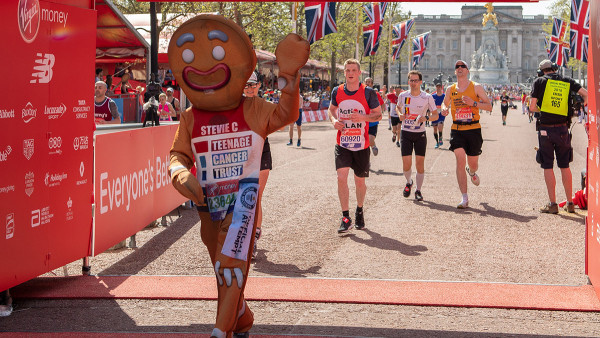 Why would you run in fancy dress? Most people would agree that running 26.2 miles is hard. You train for months, change your diet, cut back on alcohol, splash cash on kit, read books and watch films to inspire you.

However, some people see the challenge of running a marathon as not enough. They want to add another layer (literally), so choose to run in fancy dress. From cavemen and lifeguards to Daleks and rhinos, there's a whole world of fancy dress running out there ready to be explored.

It also brings the extra bonus of potentially breaking a Guinness World Record, and how many people can lay claim to having their name etched on a world record? Even if it is for ŌĆśFastest marathon dressed as a monk (female)ŌĆÖ.

We have a complete guide to running in fancy dress below. All that you need to do is choose the costume. Oh, and run the race.

Need a boost for your fundraising? Don fancy dress. Your friends, family and colleagues will be more tempted to reach into their pocket if they see a picture of you running through the streets of south London dressed as the gingerbread man.

For many runners, going for a Guinness World Record adds another layer to the challenge of running a marathon. ThereŌĆÖs a record for pretty much any costume you can think of, and if it doesnŌĆÖt exist, Guinness will create a record especially for you.

For this, you need to have secured a place at a selected marathon, such as London, where an official adjudicator will verify your costume at the start, during the race, and at the finish.

The key is choosing a costume that has a record that you think you have a chance of breaking. So if, for example, your marathon PB is 3.10, and you have access to a bishop costume, you might have a decent shot at bagging ŌĆśFastest marathon dressed as a bishop (male)ŌĆÖ, which stands at 3:21:32.

The most famous, and fastest, runner in fancy dress is Japanese hero, and winner of the 2018 Boston Marathon, Yuki Kawauchi. He warmed up for his famous marathon victory by running a half marathon dressed as a panda. His time? 1:10:03. He also ran the same race the previous year in a three-piece suit.

The first runner to dress up in costume is thought to be SwitzerlandŌĆÖs Roger Bourbon, who wore a waiterŌĆÖs outfit, complete with tray, to run the London Marathon in 1981 and 1982. Eyebrows were raised at the time, as the event was taken more seriously in those days.

Rob Pope recently set the record for the much sought-after fastest marathon in film costume dressed as Forrest Gump in 2018, clocking a hard-to-beat 2:36:28.

These days, costumes are becoming ever more grand and ostentatious, and the wacky outfits make great entertainment for spectators and the world of social media. Footage of Big Ben went viral twice this year: once being blown along the road on a windy Big Half in Canary Wharf, and then attempting to get under the finish line at the end of London Marathon.

Having run London Marathon myself dressed as a lobster in 2018, gunning (unsuccessfully) for the fastest crustacean record, my advice would be yes. I only ran one parkrun in full costume prior to the big day, and running 5k was nowhere near enough preparation for running 26.2 miles, particularly in regards to how much heat the foam-based body would keep in.

ItŌĆÖs a matter of weighing up whether you donŌĆÖt mind cars beeping you and strangers shouting comments such as ŌĆ£DonŌĆÖt be shellfish!ŌĆØ as you pound out a Sunday long run round the streets of Croydon. Practising running in your costume also helps to identify bits that might prod you and chafe in areas you would never have thought of.

Having said that, nothing could have prepared me for the heat on the day of the race, the hottest London Marathon on record. Some things are simply out of your control.

If you decide to go for a world record, youŌĆÖll find that Guinness is rigorous in its validation procedure.

First of all, you are required to fill in this form, complete with front and back pictures of you in full outfit, and proof you have been accepted in one of its validated races (such as the London Marathon).

These pictures are then verified, and changes to the outfit requested if it does not meet regulations (for instance, I wore normal socks, and was told my outfit had to go from head to toe, so needed to cover my lower legs).

Be warned that this can take some time (up to 12 weeks), and there is a deadline for London Marathon applications, so the earlier you get on this, the more chance you have of securing your official record attempt.

ItŌĆÖs at this point you get to meet all the other runners attempting to break world records ŌĆō among others, I met a man in a straitjacket, a man in ski boots, a gingerbread man, a mixed three-legged pair and a woman in a suit ŌĆō itŌĆÖs not often you can say that.

Then itŌĆÖs the easy part: running the race itself. If you remove any part of your outfit while running you will be disqualified from your attempt (there are official spotters dotted throughout the course).

Finally, if you cross the line in record time, an official will check your costume, and if all is correct, present you with your well-deserved certificate, leaving you to go home a world record holder.

Checking the weather is even more crucial on race day if youŌĆÖre in fancy dress. An almost essential piece of kit, especially for those in full-body costume, is a sweatband. Sometimes itŌĆÖs required for keeping a headdress in place, sometimes purely to stop the seemingly unstoppable perspiration from flooding into your eyes.

Also, logistics. If you are wearing an unwieldy dinosaur costume, how are you going to get it on the (usually packed) train to the start? Does it need to be able to be broken down into parts, or should you be aiming to get on the earliest, and quietest, train possible?

Hydration is extra-important as if parts, or all, of your body are covered in a highly unbreathable material, you need to replace the fluids you are losing. Ensure you take on more water than you would normally.

Pockets to stash gels/wallet/phone are a useful addition if you can add them/sew them on somewhere on your outfit, and consider the fact that your visibility might be limited by your head apparatus.

So, if after all this, youŌĆÖre thinking of giving it a goŌĆ” here are some current records to consider: 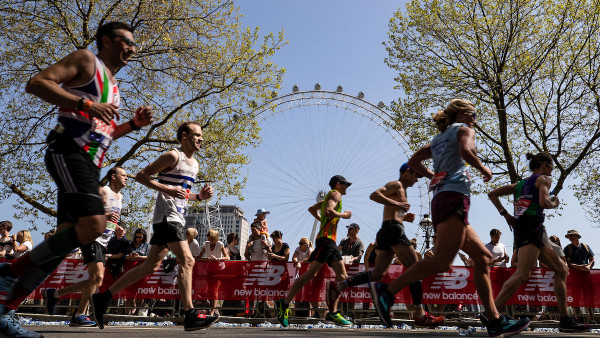