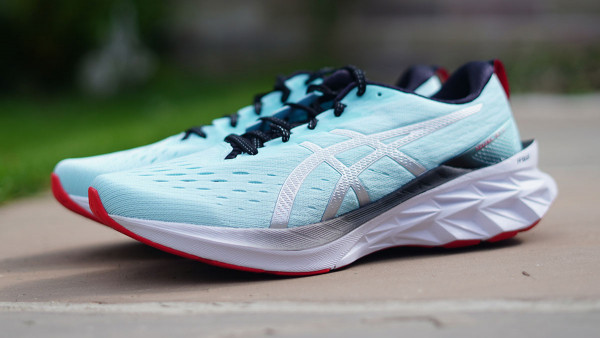 Saturday
Our experts choose the best gear, events and locations to help you do what you love. Get Sweat Go may receive affiliate revenue from monetised links ā but we'll only recommend stuff we believe in.

The Asics Novablast 2 is a running shoe that needs little introduction. The original was released in early 2020 and became one of the year's most popular shoes due to its versatility and soft, enjoyable cushioning.

It was, however, not without its flaws, the most prominent of which being the lack of stability caused by the high stack of thick FF Blast cushioning ā something that many users pointed out made the shoe feel too wobbly.

The Novablast 2 aims to address that and other concerns with an updated design, adding a thicker base, more cushioning in the forefoot and a new improved upper design for comfort.

We've been putting the Asics Novablast 2 through its paces over 50 miles of running. Is it worth investing in as your next daily training shoe? Let's take a look.

The original Novablast became a popular all-rounder shoe when it was released largely due to the large stack of FF Blast midsole foam. As well as being soft and cushioned, it also offered a versatility that meant it could be used for faster training miles in addition to high mileage effort.

The Novablast 2 takes the necessary learning from the original and aims to deliver the same benefits, whilst addressing some of the issues raised by runners.

The most noticeable issue from the first Novablast was a lack of stability caused by the high stack of midsole foam. The soft, bouncy FF Blast material worked well on the flats in most cases but often felt wobbly when turning corners or hitting varied surfaces ā especially for those who pronate.

In the Novablast 2, Asics has increased the width of the midsole to produce a more stable base whilst still using the same midsole foam. It's a modification that pays off and adds a welcome level of grounding to the shoe.

Asics has also added more cushioning to the forefoot of the shoe to help produce a softer landing and an increased rebound at toe-off. It's not a modification we noticed in testing and we didn't feel it offering anything more than what we experienced in the original shoe, but it also isn't an update that lessens the shoe for us.

Finally, Asics has made some changes to the upper to improve the comfort of the shoe and solve some previous qualms with the fit and structure of the original. For us, it's another welcome update and we found it to be softer and less rigid than the previous design.

If you're a runner that has owned the original Novablast, you won't be surprised or disappointed by the Novablast 2. It offers an almost identical experience to the original with some slight adjustments that help to improve the overall feel and stability of the shoe.

The FF Blast midsole foam has an impressive balance of soft cushioning and responsive bounce, allowing the shoe a versatility to be used for everything from slow enjoyable miles all the way up to faster training efforts. The result is a shoe that fits nicely into most shoe rotations or can equally act as an all-rounder for runners that want one shoe for all of their training.

The thicker width on the midsole is a noticeable change and does make the shoe feel more stable underfoot. The update does, however, remove some of the bounce we experienced in the Novablast 1, especially when wearing the shoe for the first few times. We found that it took around 30km to soften the midsole foam.

The updated upper manages to improve on a lacking design in the previous version with a softer and more flexible mesh. In comparison to shoes like the New Balance Fresh Foam 1080v11's knitted mesh upper it's still not the most comfortable option out there and can feel too think and rigid, but it's an improvement on the Novablast 1.

The Asics Novablast 2 is an improvement on the previous shoe, adding some much-needed stability to an already impressive daily training option. Like the Novablast 1, the shoe is best used for comfort and cushioning when clocking up the miles, but also has the versatility to be used for training at higher paces.

If you'd rather watch than read, you can see a full review of the Merrell Moab Flight in this detailed video from our friends over at The Run Testers (don't forget to subscribe for more guides for runners).