We try out Hoka One One's lightweight Rincon running shoe 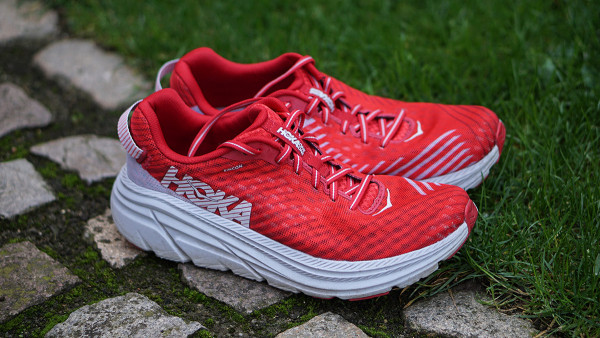 Sunday
Our experts choose the best gear, events and locations to help you do what you love. Get Sweat Go may receive affiliate revenue from monetised links ā but we'll only recommend stuff we believe in.

Hoka One One has massively upped its game recently when it comes to fast and lightweight shoes, and the Rincon is no exception.

We spoke in our Carbon X review about HOKA ONE ONE turning its focus towards faster shoes, in contrast to the more cushioned support shoe we generally know the company for. The Rincon continues that development and is by far one of the lightest shoes we've used recently.

Another important feature of the Rincon release, and one that's surprising considering what HOKA ONE ONE have managed to deliver (more of that later), is the incredibly low price tag in comparison to shoes like the Nike Pegasus Turbo 2 ($180) and the Carbon X ($180).

Like the Carbon X, the Rincon is a significantly sleeker-looking shoe than the bulk of HOKA ONE ONE's back catalogue. Yes, there's still a hint of that chunky style, most noticeably in the heel, but it's minimal in comparison to most previous offerings.

The aesthetics are almost identical to the Carbon X; the upper is made from an extremely thin breathable mesh (although the Rincon version feels less like fabric), there's the same heel loop to help get it on more easily and there's the noticeably curved outsole on the heel. The only differences are minor, noticeably the tongue and laces which are slightly thicker.

The outsole is made from HOKA ONE ONE's popular EVA compound, a material that feels incredibly light as well as extremely soft when you press it. The one thing it doesn't feel, however, is durable.

Overall it's a great looking shoe that should keep both HOKA ONE ONE fans and the non-converted happy.

When we first took the Rincon out of the box we weren't entirely sure what to expect. The outward design still gives a slight appearance of a chunkier stability shoe, however, when you pick it up you realise how light it really is. To be honest, our first impression was that it felt a bit cheap, which trust us, is purely due to the weight and nothing to do with how it performs as a running shoe.

When you put the Rincons on for the first time they feel great. Comfortable and supportive from the off but with very little weight. In fact they're so nice to wear from day one that the first run feels like you've been wearing them for days.

We've used the Rincon for 70km of running now, including a 10k race, a half marathon, an interval session and some longer distance training runs. In every situation it's performed extremely well.

In training runs it's extremely comfortable for long periods, being light, breathable and offering an impressive level of energy return. A 10-20k training run is an enjoyable experience and we've had no negative points over the time we've been running in it.

For races, the Rincon deliver almost as well as the more expensive options. The only downside in performance is the lack of a plate in the midsole, which is only noticeable if you've run in the Carbon X or a similar high-performance shoe. In reality, unless you're racing at a certain level, you're unlikely to need to worry about that, and the cost massively outweighs the benefit unless you're after some fast times.

The first run feels like you've been wearing them for days

HOKA ONE ONE used an early stage Meta-Rocker for the Rincon, aiming to deliver a quicker transition from heel to toe. To be honest we didn't notice anything special here. There's certainly no negative aspects to the transition considering how much we've been wearing it.

The only other thing we noticed is that the EVA compound foam on the outsole does seem to burn down pretty quickly. We noticed it happening after around 20k ā so durability is likely to be the trade-off if you invest in the Rincon.

Unless you're a top level athlete or you have specific support needs from your shoes, we'd say the Rincon are an impressive all-rounder that's an excellent option for most runners. Aside from the fact it's one of the most comfortable new releases we've tried, it'll cover you whether you're hitting a parkrun every week or training for a marathon.

The Rincon is an impressively lightweight and comfortable shoe that delivers far beyond its price point. A great option for those wanting a single shoe for training and racing, with the only downside being the durability of the outsole foam which is likely to lower the life expectancy of the shoe. Overall rating: 4/5