Review: Saucony Kinvara 12 | The traditional lightweight shoe gets some updates

A conventional speed shoe that sticks to what it knows best 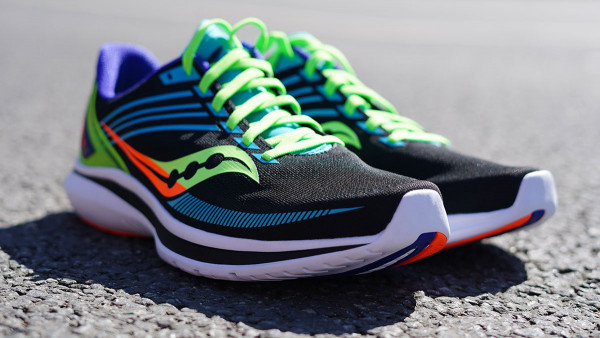 Sunday
Our experts choose the best gear, events and locations to help you do what you love. Get Sweat Go may receive affiliate revenue from monetised links ‚Äì but we'll only recommend stuff we believe in.

With a name that's synonymous with fast running, Saucony is back again with the twelfth version of its lightweight favourite, the Kinvara 12.

It's a shoe that we've used across its many iterations over the past decade and has long been the flagship option for runners looking for a leaner shoe when speed training and racing.

As well as many of the features that have made the Kinvara line so popular in the past the Kinvara 12 includes a number of modifications, including an updated midsole design and a modified upper to improve the weight of the shoe.

We've been putting the Sauoncy Kinvara 12 through its paces over 60 miles of running. Is it worth investing in as your next speed shoe? Let's take a look.

The Kinvara line has, for many years, been Saucony's go-to shoe for those looking for a lightweight and responsive option that delivers the goods when you want speed. Like its predecessors, the Kinvara 12 strips down Saucony's technology to focus on those elements that help with going fast.

The main performance technology used in the Kinvara 12 is the PWRRUN cushioning that sits in the midsole. It's used in a number of Saucony's shoes and aims to deliver responsiveness with a modest level of cushioning. There's been an update in this version to include a subtle dovetail section at the rear as well as a slightly harder feel to the midsole foam.

The mesh upper has been updated from the Kinvara 11 with a leaner, thinner construction that uses printed design elements to add structure.

There is a very limited covering of rubber on key areas of the outsole to protect the PWRRUN foam used in the shoe.

The shoe for us was true to size, although the upper does have a more relaxed fit than we experienced in the Kinvara 11. This means you need to lock the laces down tightly to get a secure fit.

If you've experienced the Kinvara 10 or 11, the 12 will be no major surprise to what you're expecting. Like its predecessors, it's a light and comfortable shoe designed for faster efforts, whether that's tempo training or race day. It sits at the lower end of cushioned shoes, offering just enough to be comfortable without feeling too soft.

The PWRRUN midsole in the Kinvara 12 feels slightly harder than what we experienced in the previous two versions, which may be an issue if you're looking for a like-for-like update to the Kinvara 11.

The upper is probably the most noticeable difference to the previous shoe with the new mesh upper feeling thinner by comparison. The result of the new design is a saving of overall weight, but we did find that it was harder to get a lockdown fit and the overall feel of the shoe felt more relaxed.

Other than these updates, the Kinvara 12 was much the same as the 11, delivering a competent and enjoyable experience when used for tempo training or faster efforts, just enough cushioning to offer a smooth ride without feeling like a cushioned daily shoe.

If you're a fan of traditional lightweight running shoes, the Kinvara 12 is still a competent all-rounder, however, if you're looking for a shoe that incorporates the latest technology to provide new features to increase performance, there are many new options available ‚Äì including Saucony's own Endorphin Speed and Pro.