Delivering the goods from daily training to race day 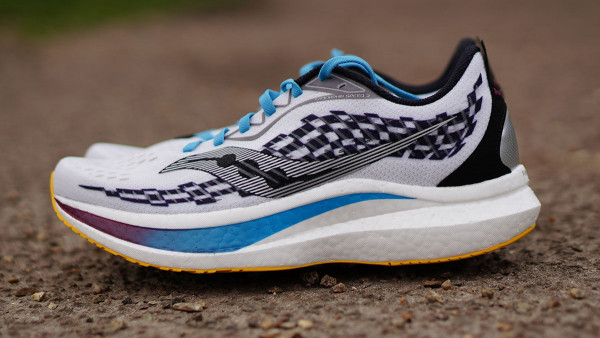 Saucony's Endorphin range has been one of the most exciting collections of running shoes to be released over the past year. The Endorphin Speed 2 is the second iteration of the series' versatile training shoe, one that's generated a great deal of interest due to the popularity of its predecessor.

The Speed 2 sits between the Endorphin Shift and the Endorphin Pro 2, designed to tick a lot of boxes for runners looking for a shoe that can tackle daily training miles at any speed.

We've been putting the Saucony Endorphin Speed 2 through its paces over 70 miles of running. Is it worth investing in as your next daily training shoe? Let's take a look.

The Endorphin Speed 2 is a shoe that aims to tick a lot of boxes for daily running ŌĆō a goal that it succeeds in almost flawlessly. Thankfully, that's largely due to the fact that Saucony has focussed its updates on the fit of the upper, leaving the impressive midsole design the same as the previous shoe.

Those updates are minimal: a snugger heel fit for a more locked-down fit, an updated breathable mesh, added suede detailing to the upper, and new anti-slip laces for a secure feel.

Like its predecessor, there's a full-length nylon plate as well as Saucony's PWRRUN PB midsole foam, an impressively light material that manages to offer a good level of cushioning whilst retaining the sort of responsiveness you'll find in a race shoe.

The upper incorporates Formfit technology that helps to fit the shoe to the shape of the foot for a personalized fit and the engineered mesh design allows airflow to the feet.

Finally, there's a healthy covering of rubber on the outsole that helps to both protect the midsole as well as offer a good level of grip on trickier surfaces.

The original Endorphin Speed received widespread praise when it was released in 2020, satisfying the needs of runners who wanted a do-it-all shoe that would deliver the goods, whether used for daily training miles or stepping over the start line of a race.

The Endorphin Speed 2 is almost the same shoe, save for a few minor updates to the upper design ŌĆō and some questionable colorways. For fans of the previous version, that will come as welcome news, because Saucony hit the nail on the head with it and deserved all of the praise the shoe received.

The nylon plate, combined with the PWRRUN PB foam in the midsole, delivers an impressive level of fluidity when running at speed. Unlike many of the carbon plate race shoes available, it's a subtler benefit that promotes a feeling of efficiency, helping you to maintain a consistent pace without openly pushing you to run faster.

The real joy of the Endorphin Speed 2, however, is its versatility. At speed, it's one of the best shoes out there, comparable with many shoes designed specifically for racing. But unlike those shoes, it also feels great on slower efforts when the focus is ticking off the miles instead of hitting PBs.

That versatility means it's a sort of hybrid shoe. For runners looking for one pair to use for all their training and racing, it's by far one of the best options out there at the moment. For those that want a tempo shoe to work alongside a carbon plate racer like the Endorphin Pro 2, it gives a similar experience but one that's less harsh.

The only downside we did find when testing the shoe is that the upper does feel slightly narrow to begin with and took around 25km to break the shoe in to feel looser and more comfortable.

There aren't many shoes out there that deliver the sort of widespread benefits that you get from the Endorphin Speed 2. It's an option that has a range of plus points for a variety of runners, from comfort over daily training miles to tempo sessions and even race day. A lot of brands try and hit the same sweet spot but there aren't many that manage to do it as successfully as Saucony has.

If you'd rather watch than read, you can see a full review of the Saucony Endorphin Speed 2 in this detailed video from our friends over at The Run Testers (don't forget to subscribe for more guides for runners).