Find out what we thought of the ISO 2 successor 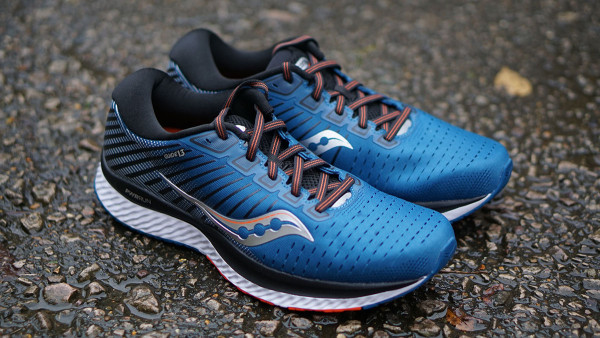 The Saucony Guide 13 is an interesting new addition to the brand's support shoe range coming in as the successor to the previous ISO and ISO 2. Interesting because Saucony has made a number of changes to those previous models.

It's actually the 13th iteration of the Guide range, continuing the previous moniker before Saucony renamed the last two versions on the basis that they used the updated ISOFit upper. Now it's been updated again based on the learning of 12 generations of the shoe.

Saucony's marketed message of the shoe is "For those who crave reliable comfort on any run and need some support, the Guide 13 gives the best balance of feel-good cushioning and fluid guidance through the gait cycle."

We've been testing it out to see how that claim compares with other support shoes available at the moment.

As soon as you take the Guide 13 out of the box you instantly know there's something different about the shoe in comparison to the models that have come before it. The overall look and feel has changed quite dramatically from the ISO models ŌĆō significantly more so if you ever got your hands on the early Guide-titled shoes.

And it's a very nice look indeed. For a support shoe, it's subtle. Not minimal by any stretch of the imagination, but the sleeker, smoother new upper combined with the less noticeable sole thickness makes for a considerably more attractive shoe.

In terms of weight, it isn't a light shoe ŌĆō coming in at 289g, but for a support shoe that's far from a deal-breaker and the cost of that weight is offset by the benefits you get from those features.

The upper part of the shoe feels extremely hardwearing and the new material that replaces the previous ISOFIT upper offers a lot of room for the foot without feeling loose. Whilst wearing the Guide 13 we were impressed with how secure the foot felt without feeling restrictive.

In addition, there's also FORMFIT in the footbed of the upper which is designed to help the overall secure feel of the shoe with something Saucony explains as a three-layer cushioning system.

The new upper and the FORMFIT complement each other in providing a secure and adaptable fit while you run. One noticeable feature of the Guide 13 is the heel section. This whole area of the shoe feels significantly thicker and more rigid than the mid and forefoot.

In part that's due to the touch heel support, something that noticeably holds the foot in place, but also largely due to a thick heel collar which feels incredibly soft, but offers a bit too much cushioning for us ŌĆō a feeling that made us feel like we didn't quite have the shoe on properly because it felt too soft on the ankle and there was some slight movement.

The sole of the Guide 13 has been updated to include a new TPU heel counter that sits between the inside heel and the arch of the foot as well as a TPU/EVA blended foam cushioned midsole, called PWRRUN.

On top of that is a new crystal rubber outsole that's slightly thinner than the previous carbon rubber.

We've tested the Saucony Guide 13 out on training runs from 5k to half marathon distance and found it to be a very enjoyable training shoe. From the moment you start wearing them, there's a noticeable comfort from the upper design that's mirrored with a slightly bouncy sole design.

The foot consistently feels like the foot is held firmly in place throughout the whole run save for the slight issue of the overly cushioned heel collar. That feeling disappears after a couple of miles and had no issues for us in terms of comfort or rubbing.

The cushioned outsole is more than enough to offer comfortable ride which works very well with the overall secure feel of the shoe. In terms of energy return, we didn't notice a great deal and for the most part the only feeling we got from running longer distances in them was a lack of any issues during the ride.

That TPU support in the shoe does a great job of offering a level of supports that's noticeable without feeling too obtrusive. That makes it a great option for those looking for a semi level of support shoe.

The only downside we found for the Guide 13s was that the thick upper lacked breathability, especially on warmer days. It wasn't a deal breaker but in comparison to some of the lighter fabric uppers found on shoes at the moment, it did leave our feet a bit sweaty.

The Saucony Guide 13 is a really nicely balanced support shoe that offers a comfortable, cushioned and well-fitted run. The new design features implemented over the previous ISO 2 offer a handful of upgrades that we were really impressed with, specifically the new TPU support, the mesh upper and the inclusion of the PWRRUN midsole.

That said, the Guide 13 doesn't particularly excel in any area but instead delivers across a range of features. For anyone that wants some support but doesn't want an overly obtrusive shoe, the Guide 13 is well worth a look.