The Cambridge Half Marathon running guide: Insider tips for smashing the race

The things we wish we knew before we took part 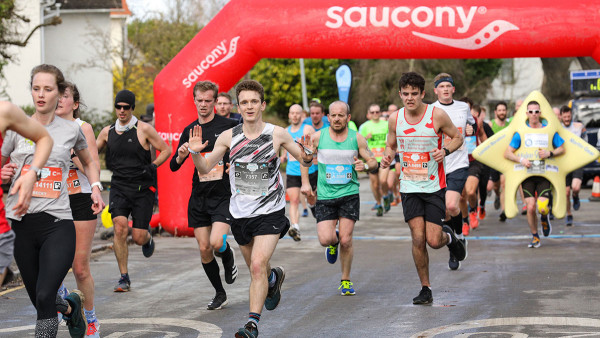 If you're planning on taking part in a UK race, the Saucony Cambridge Half Marathon is well worth a look if you want a flat, fast course with some of the county's most impressive historical landmarks.

Now in its 8th year, the Cambridge Half Marathon has become one of the biggest events in the UK race calendar with over 11,000 people completing the 2020 event and thousands of supporters lining the route.

The course, as you'd expect from an event that takes place in one of the country's foremost cities, takes in some of the area's most famous locations. As well as winding through the university buildings, you can expect to pass the village of Grantchester, the beautiful canal and the cheering crowds in the town center.

But what do you need to know if you're taking on the Cambridge Half for the first time? Here we run through some of the key things we learned from running in the 2020 event.

Be prepared for a busy start

The first mile of the race takes place on some of the thinnest roads across the whole course. So, if you're aiming for a fast time, make sure you're in the right wave as overtaking over this first section is almost impossible. Either that or pace your race to account for the first mile being slightly slower.

The start area around the race village also gets very congested, so make sure you get down early and sort your bag/nutrition/toilet usage out so you can get over to the start line with plenty of time spare.

There are some tight turns

Weaving in and around the incredibly scenic university buildings comes at a price, especially around miles 3 and 4. Expect it to get pretty tight and keep an eye out for people trying to overtake as you're likely to get jostled. If you hold on until past mile 4 the course opens up and you can relax back into a nice pace without worrying about the other runners.

The route outside the city is quiet

Whether that's a good or a bad thing depends on your preference. For us, the wide-open roads and lack of crowds was by far one of the most enjoyable sections. You have a good few miles to settle into a pace and get your head down before the final section where it can get a bit intense.

It's a section that, on a nice day, can be very enjoyable. On a wet, windy morning expect to get fairly battered as there's minimal protection from the elements.

The crowds are impressive

Yes, it's very easy to big up the crowds at any event, but when you consider that Cambridge is one of the UK's biggest inland tourist locations it's not surprising that there's an awful lot of spectators out there during the race.

Although the mid-section of the event has minimal support, the early and final stages receive an enormous amount of cheering crowds. The last couple of miles, in particular, offer some of the nicest motivation-boosting roads we've come across in a race.

It's flat... but not completely flat

Although it's a fairly flat race when you compare it to somewhere that has actual hills, the Cambridge Half Marathon isn't without a bit of elevation. Overall you're looking at around 100m gain across the whole distance ŌĆō which is pretty flat ŌĆō however, there is one section from the 5-mile mark which, although minor in terms of height gained, did seem to drag on for longer than we would have liked.

There's a lot to look at

We probably don't need to tell you that Cambridge has some beautiful scenery, both around the university buildings and the surrounding countryside, but that's not always a guarantee that the actual course will be nice.

Luckily, the Cambridge Half Marathon course takes in a well-planned route around the city, weaving in and out of university grounds, along the canal and through some of the city's most impressive streets. The organizers have even updated the route for 2020 to include more sightseeing for the runners.

For more information on the Saucony Cambridge Half Marathon and to find out how to sign up for the 2021 event click here.