And four of them aren't actually running 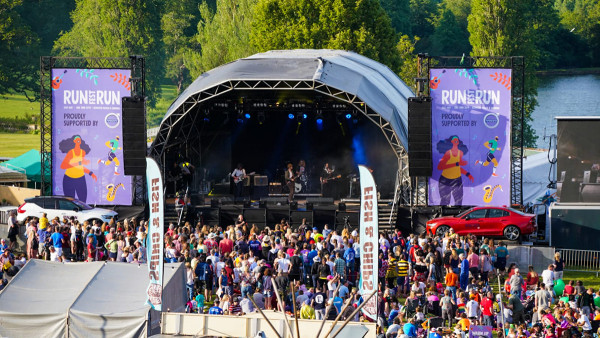 A few weeks ago we mentioned that RunFestRun was moving location from its 2019 home in the Wiltshire countryside to its new place of operations for 2020 - the impressive Windsor Great Park.

Now we can tell you that not only are tickets now live, but team Get Sweat Go will be heading over for the weekend. (Don't forget to follow us on Instagram for updates).

2019's inaugural RunFestRun saw thousands of runners make their way to the festival grounds for three days of running as well as a wide selection of run-related activities spanning the weekend. But why exactly would you want to go to RunFestRun and what makes it different than other running events?

The 2019 event was far from an eyesore, but RunFestRun has trumped it with the new location at Windsor Great Park. A place famous for having a massive range of tourist locations, from the largest and oldest occupied castle in the world Today - the Queen spends most of her private weekends at the Castle - to its picturesque river tours and 'the Long Walk'; a tree-lined avenue that stretches towards the ancient fortress.

It's a location that already has a fair amount of running heritage - most importantly the Windsor Half Marathon, a race that starts and finishes on the famous stretch and has been going for 37 years.

There's a frankly ridiculous number of races across the three days. For those heading over on the Friday, there's the Sunset Shuffle tour run where you can get a feel for the various routes taking place over the weekend.

Saturday is the big day though with 2.5k, 3k, 5k, 10k or half marathon distances - all taking place at different times as well, so if you want to do every single one of them, it's all covered in the ticket price.

Still not enough? You can finish off the day with a final RunFestRun Party Run as the sun comes down - for those who are looking for fun as opposed to PBs. Then on Sunday, it's time to pick your outfit and head out for the family fun run.

It's a family affair

If you're looking for a serious weekend of PB hunting with hundreds of speed-focussed athletes, then you're barking up the wrong tree. RunFestRun is a running festival about good old wholesome fitness fun. It's a place for people who don't want to take things too seriously and spend some time with the family.

As well as the various family-friendly events, the site is dotted with fun activities for everyone, whether that's the specially designed kidz zone, the Retreat where you can get a rejuvenating, restorative massage or the shopping village - in case you fancy topping up your running wardrobe.

Running is by far the focus for the weekend, don't worry yourself about that, but if you like mixing up your miles with other activities then RunFestRun is the place to be.

As well as food and drink from brands like Anna Mae's, Bennett's Fish & Chips, Eat Shoots & Leaves and the Duck Truck, there's also music from top artists and bands. The line-up isn't released yet but the the 2019 event saw Olly Murs, Faithless, Razorlight and Reef performing across the weekend. That should give you a pretty good idea of what to expect for 2020.

If it's motivation that you're after then you've come to the right place. The 2019 roster of speakers was pretty incredible, with the likes of Vassos Alexander, Paula Radcliffe, Fearne Cotton, Colin Jackson, Susie Chan, Steve Cram, Christine Ohuruogu, Chrissie Wellington, Ben Smith and Jo Pavey propping up the stools in the speaker's tent - so, if you're struggling for some inspiration to get out there and run, you're in very good hands.

For more information on the 2020 RunFestRun event and to pick up your tickets click here. Weekend tickets cost from ┬Ż140 (earlybird) with individual day passes starting from ┬Ż40.