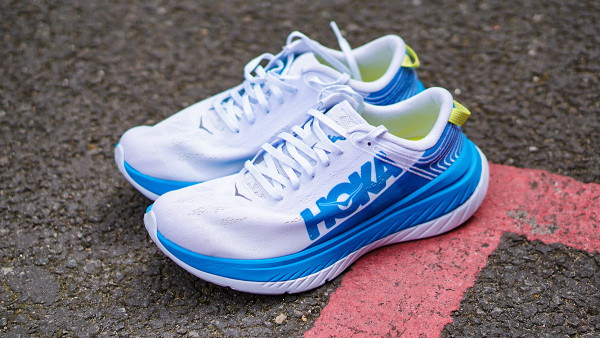 Hoka One One has hit the news a fair bit recently with Jim Walmsley's recent world 50-mile record during the Project Carbon X 100k race in California. The shoe he did it in was the the Carbon X, Hoka One One's latest race shoe to hit the public.

For racing, especially on road, Hoka One One has never been a brand synonymous with speed. The bulk of its back catalogue is largely popular with runners looking for support and cushioning, often favoured for training runs as opposed to fast competition racing. The Carbon X aims to address that with a shoe designed to sit up there with the likes of Nike's Vaporfly 4% and NEXT%.

Aiming to maintain the support and cushioning Hoka One One's fans know and love with a weight closer to that found in sleeker products, the designers have also added a number of new features to increase energy return and propel runners forward, including for the second time in a Hoka One One shoe, a carbon plate.

The first thing you notice about the Carbon X design is that it's a lot sleeker than many of the previous Hoka One One shoes available. Yes, it still has that chunky design associated with the brand, but it seems significantly more streamlined than what we've come to expect. Aesthetically, it's a really nice looking shoe that's ready for a range of interesting colorways.

The upper and tongue are noticeably thin, made from a very lightweight single-layer fabric that's meant to be breathable. It's almost t-shirt thickness - straight out of the box you can see the fabric creasing towards the toe. The result is a top section that's fits like a sock with mesh openings to keep the feet cool. For some that material may seem a bit flimsy, but based on a number of runs we've found that not to be the case.

One nice feature, and something that's inevitably been added due to the light fabric often making it tricky to pull the shoes on, is the addition of a heel loop for pulling up the shoe onto the foot.

The Carbon X is first and foremost designed as a race shoe, and based on its use for a 100k world record attempt, its modus operandi is long distances. We've been using it from shorter runs to full marathons to get a feel for where it delivers best - it probably comes as no surprise that we enjoyed wearing it the most when using it for higher mileage.

The added propulsion and cushioning is great for most runs, whether that be shorts distance training, 5k races or marathons. However, where it excels at longer distance comfort and energy return, there are far better options for those serious at running fast shorter distances - specifically the Nike Vaporfly 4% and NEXT%.

That said, the durability and build of the shoe make it a far better investment than many race options, especially if you just want one pair that'll keep you going for a few hundred miles before having to buy new ones.

In terms of transition, the Carbon X is a tricky shoe to pin down. Unlike the Nike Pegasus Turbo, where the heel-to-toe delivers a smooth rocking motion as you run, the Carbon X is a bit flatter. It's generally best suited to toe strikers as the heel offers a nice level of cushioning and energy return, however for heel strikers there's a noticeable lack of fluidity to the overall movement. It's not a show stopper, but if you're a clear heel striker, it's something to consider.

The Carbon X are a great option for anyone that wants a good, all-round pair of running shoes that deliver a top-end experience. In the running leagues it's up there in the higher levels as a pro shoe that, for the right person, may well be the perfect race shoe, especially for marathons. Support, comfort, fast race-tech and a really nice, light design all go to make the Carbon X an impressive bit of kit.

For serious speed runners that are happy to spend money on multiple pairs of shoes, the carbon X are unlikely to be taken out on race day. But, for a training shoe that'll be durable enough to cover a load of miles and still deliver as a fast shoe, it's a great addition to the shoe rack. We've been using the Carbon X as our training shoe for a few weeks now and we've grown quite attached to it.

The Carbon X is a nice shoe that ticks a lot of boxes for recreational runners. For competitive athletes is may not have the speed of some of the big players, but there's no denying it's an enjoyable and comfortable fast shoe when covering longer distances.