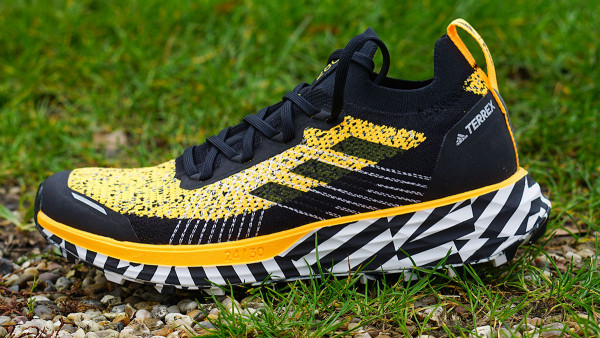 Sunday
Our experts choose the best gear, events and locations to help you do what you love. Get Sweat Go may receive affiliate revenue from monetised links ā but we'll only recommend stuff we believe in.

The Terrex range from Adidas has long been one of the most popular choices for those taking on the trails, combining technology used across both road shoes as well as features specifically made for tougher terrains.

In the case of the Terrex Two Parley running shoes, the key elements are Lightstrike cushioning in the midsole, a Continental Rubber outsole and the use of Parley Ocean Plastic in the upper.

It's a shoe designed to offer a comfortable and stable ride across a range of trail surfaces, from harder paths to soft grass and mud. It also features Adidas's Primeknit upper, used in some of the brand's previous shoes.

We've spent the past few weeks putting the Adidas Terrex Two Parley through its paces to see if it's worth including in your trail shoe collection.

When it comes to aesthetics, Adidas has come up with one of its most eye-catching and attractive shoes to date. The bold combination of colours makes for a design that hard not to enjoy ā that's assuming you like orange ā and the black and white lower section of the shoe makes for a creative update to the Terrex styling.

The most important design aspect for us is the inclusion of the Lightstrike technology in the EVA midsole. This fairly recent material to Adidas's technology armoury is being seen increasingly across shoe releases, offering an alternative to the hugely popular Boost midsole. The focus here is offering a balanced, lightweight ride built for responsiveness and speed.

The outsole utilises Continental Rubber ā by far one of the most durable materials Adidas has ever added to its line-ups. When it coms to grip, especially on wet ground, it has in the past been one of the leading technologies used across both road and trails.

The Primeknit upper is where Adidas has included its Parley material, made from up-cycled plastic waste. Although slightly more rigid than the upper found in the Ultraboost road shoes, it still delivers a comfortable and sock-like fit. There's also a thicker, supportive heel for stability and an elasticated collar for comfort.

Unlike the Boost midsole used across many of Adidas's shoes, including the slightly more expensive Terrex Two Ultra Parley, the Lightstrike material offers a harder ride. It still has a good level of cushioning, however, in contrast to the soft, bouncy Boost material there's a noticeable difference.

When it comes to trail running, the need for bounce is significantly lessened, especially over shorter distances, with the focus on grip, stability and comfort. The Terrex Two Parley do a very good job when covering each of these aspects. On wet, muddy trails they offer a consistent level of grip without becoming overly clogged with mud and debris, while the Primeknit upper feels soft, yet secure, holding the foot in tightly.

One of the nicest elements of the Terrex Two Parley for those runners who cover routes between trails and harder road surfaces is that the midsole delivers a similar experience to what you would expect from a road shoe. This is particularly good for those semi-trail runs/races where a large part of the race is on road, and a shoe specifically built for trails can be uncomfortable.

The fit of the shoe, like most Adidas options, is slightly narrow, although there is a lot of room in the toe box. We found that it took a few runs to loosen up the upper material, but from that point, they were true to size.

Unlike some trail shoes, the Terrex Two Parley isn't designed to be waterproof. With some light rain, this doesn't cause a problem, however, in wetter terrain you'll need to invest in some waterproof socks.

Another nice feature we found was the fact that the elasticated collar on the upper did a good job of stopping dirt and debris from falling into the shoe when out running.

The Terrex Two Parley is a good option if you're looking for a trail shoe that delivers an all round experience, taking you from muddy canal paths to rocky hill ascents ā as well as all the roads and path in-between. The inclusion of a Lightstrike midsole offers a harder ride which feels comfortable and responsive over short to mid-level distance, although we prefer the Boost for tackling longer distance efforts.