A carbon plate shoe that dramatically climbs up the leaderboard 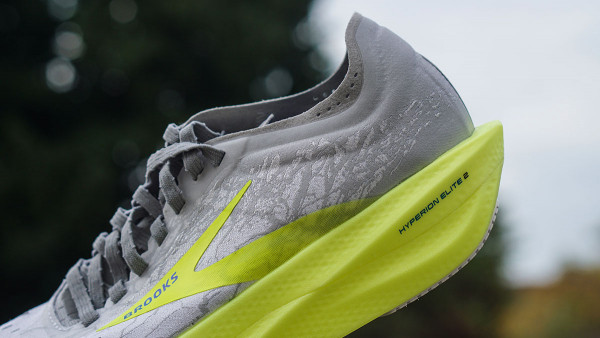 The original Brooks Hyperion Elite running shoe appeared early in 2020 as one of the earliest carbon plate competitors to the Nike Vaporfly NEXT%. Unfortunately, that first iteration failed to receive widespread credibility from runners looking for the next big race shoe.

The most important issue was durability, with Brooks suggesting that the shoe would deliver the best results only up to 160km. The second issue was a hard midsole that felt nothing like the soft bouncy experience runners had come to expect from Nike's offerings.

Just a few months later and Brooks has made some major improvements in the Hyperion Elite 2 design, the most important, perhaps, is the inclusion of DNA Flash midsole instead of the previous DNA Zero foam.

We've spent the past few weeks putting the Brooks Hyperion Elite 2 through its paces over 60 miles of running. Is it worth investing in as your next race shoe? Let's take a look.

Like most carbon plate race shoe designs, the Brooks Hyperion Elite 2 strikes an impressive first impression. A thick, bright neon midsole that runs the full length of the shoe, topped off with a patterned metallic upper.

But it's what's under the bonnet that counts when it comes to race shoes, especially when you're spending $250 for the privilege.

The nitrogen-infused DNA Flash midsole is the same used in the Hyperion Tempo and the Catamount trail shoe, both of which have received a welcome reception from runners. Unlike DNA Zero, it's an addition that brings a softer, more responsive ride, which, in as well as the carbon plate, aims to deliver a noticeable increase in the level of energy return for up to 400 miles.

As well as a stack height increase of 2mm for increased cushioning, Brooks has also incorporated its Rapid Roll Technology for a smooth transition when picking up the pace.

On the outsole sits a very light coating of rubber to protect the midsole foam ŌĆō making it clear that the shoe is focused purely on road racing.

Comparisons with Nike's offerings are always unavoidable when reviewing a new carbon plate shoe. The dominance of the brand over the last couple of years has meant that carbon plates are defined by those expectations instead of the individual product merits.

Like many other carbon plate options of 2020, the Brooks Hyperion Elite 2 doesn't deliver the same experience as the Alphafly NEXT% or the Vaporfly NEXT%. But that is by no means a bad thing and the feel of the shoe is both a massive improvement on its predecessor and an excellent option for road racing.

The addition of DNA Flash foam may not offer the bounce of Nike's shoes, but it's a responsive ride that feels light and snappy on the road. At a slower pace it's almost unnoticeable, and, if you were taking the shoe out for a comfortably slow run you'd be forgiven for thinking there's very little to distinguish the Hyperion Elite 2 from your daily trainer. Pick up the pace, however, and the design kicks into gear.

Although the details of Rapid Roll Technology are somewhat unclear, it's a feature that makes a difference when picking up the pace, bringing a smooth, consistent transition that feels natural and comfortable.

We've tested the Hyperion Elite 2 across a range of distances and training formats and felt it worked well from track intervals sessions up to long distances. Whether you're doing a 5k or a marathon, it's unlikely you would be disappointed with the experience.

The only downsides we found to the shoe were the thin outsole ŌĆō which didn't offer a great deal in terms of grit on wet pavement ŌĆō and a strange lace design that we often found difficult to tighten up comfortably.

The Brooks Hyperion Elite 2 is a vast improvement on its predecessor and offers a great all round performance when it comes to racing across any distance. In the rankings of carbon plate offerings out there today it sits in the upper quadrant as a versatile and high performing shoe.

For us, however, the biggest factor in picking up a pair is the price. At $250 it's one of the more expensive carbon plate racers available at the moment, with many releases over the past year coming in significantly lower whilst offering a similar experience. At that price point, you're also not far off Nike's premium options which, for us, still hold the top spot for race shoes.