Review: On Cloudboom | We get to grips with On's latest speed shoe

The battle for the best 2020 race shoe continues 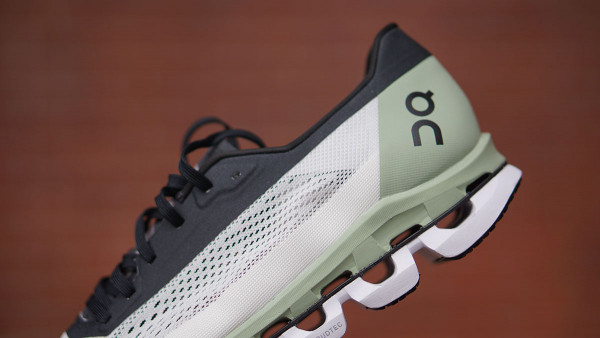 Tuesday
Our experts choose the best gear, events and locations to help you do what you love. Get Sweat Go may receive affiliate revenue from monetised links ‚Äì but we'll only recommend stuff we believe in.

As 2020 draws towards the latter part of the year, the sheer number of new running shoes released specifically for racing shows no sign of slowing down. On's entry into the year's performance shoes comes in the form of the Cloudboom, an option that the brand claims is designed for races up to marathon distance.

Like so many other shoes of 2020, the Cloudboom's most notable feature is a full length carbon infused plate which, twinned with a lightweight upper, is built for going all out on race day.

We've spent the past few weeks putting the On Cloudboom through its paces to see if it delivers the goods when it comes to hitting those PBs.

Fans of On shoes will be pleased to hear that the Cloudboom is largely a shoe that takes the brand's existing learnings and incorporates them into an updated design, as opposed to a completely new product line.

The biggest update comes in the form of the new carbon-infused Speedboard which runs the full length of the shoe. Like the familiar Speedboard found across On's ranges, it's designed to add an explosive motion from landing to pushing off into the next stride, this time with carbon fire to increase the responsiveness.

There's still the popular Cloudtec Helion superfoam, a material which added some much needed springiness across a wide selection of On's shoes when it was first introduced. Here, for the first time, there's a dual layer of the foam that sits either side of the Speedboard.

The upper is made from a lightweight engineered mesh that includes perforations across the length of the mid and forefoot for breathability, as well as reinforced areas around the midfoot and heel. Then, on the outsole is a thin, but surprisingly generous layer of rubber designed to add traction, even in wet conditions.

Overall it's a nice looking shoe and there are a lot of features which had us very excited when we read through the spec sheet. At 240 grams (Men's UK size 9) it's far from the lightest race shoe out there at the moment, with its closest competitor, the Asics Metaracer coming in at a noticeably leaner 210 grams.

On first glance, it does look like a narrow shoe, but we found that it fits true to size and we had no issues taking it out for a run straight out of the box.

In the world of carbon plate shoes, there seems to be a divide forming. At one end there are the bouncy cushioned options like the Nike Vaporfly NEXT% or the Saucony Endorphin Pro, at the other are those shoes that offer a more subtle offering closer to conventional racing flats. The Cloudboom, like the Asics Metaracer, sits in the latter.

After running in the Cloudboom for just a few miles it becomes clear that it's a noticeably hard shoe. At a slower pace that feeling delivers an experience that does very little in terms of cushioning impact ‚Äì to the point where it's actually quite uncomfortable to run in.

The Cloudboom isn't a shoe built for slower training miles, though, its sole purpose is to pick up the pace on race days. As soon as you speed up that becomes abundantly clear. Suddenly the responsiveness kicks in from the carbon infused Speedboard and you start to feel the benefit of the shoe.

We tested the Cloudboom out over multiple distances and found that between 5k and 10km it worked very well, as well as offering a good option for the track. Although it doesn't have the bounce that shoes like the Nike Vaporfly NEXT% does, there's a snappiness to the heel to toe transition that's delivers well at pace.

Anything over 10km and we found that the hardness began to counteract the benefits and the experience became less enjoyable. After one 15km run the impact of the shoe left our calf muscles aching for a couple of days afterwards.

The fact that On state the Cloudboom is designed for anything up to marathon distance seems generous for more general runners. For athletes who train and race in more minimalist shoes, that's probably not an issue, but for many of us, especially over longer distances, cushioning is a necessity.

In terms of support and stability, the Cloudboom delivered very well. The structure of the upper lends itself to ensuring a secure fit on race day, with the various reinforcements holding the foot in place.

For us, the Cloudboom is a shoe that's strength lies predominantly in any race distance up to 10k, or even half marathon for some runners. At pace, it delivers well, offering a snappy experience that offers a subtle level of energy return without noticeable bounce, however, it lacks the cushioning most runners will need over longer distances.

For the price, it's one of the cheaper carbon plate options out there, but it lacks the versatility of some of the other shoes out there.